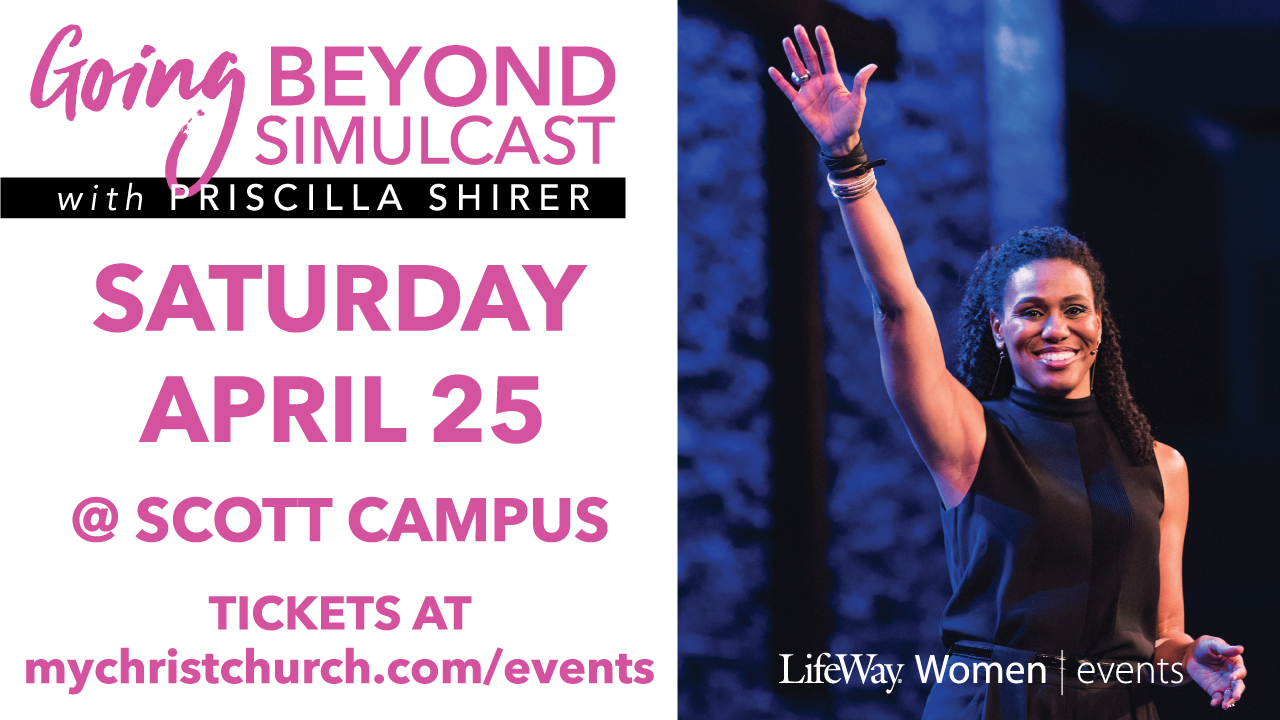 Breakfast and an afternoon snack will be provided at the simulcast. We will have Truckeria Del Valle on sight for participants to purchase lunch on your own or you may bring your own lunch.

Join women from around the world for this inspiring one-day simulcast with Priscilla Shirer that will encourage you to dive deeper into the Word of God.

Along with Priscilla Shirer, one of today’s top Bible teachers, Christian recording artist Anthony Evans will lead worship via simulcast.

Presented by the Nashville-based publishing company, LifeWay Christian Resources, the Going Beyond Simulcast brings women together from all across the globe in their churches or homes for a day of biblical teaching, prayer, and worship.

Priscilla Shirer is a wife and mom first, but put a Bible in her hand and a message in her heart, and you’ll see why thousands meet God in powerful, personal ways at her live events. With a Master’s Degree in biblical studies from Dallas Theological Seminary, Priscilla brings the depths of Scripture to life. She is the author of best-selling Bible studies, including Discerning the Voice of God, The Armor of God, Gideon, and Jonah, as well as the author of many books, including Fervent and the New York Times best-seller The Resolution for Women. She and her husband, Jerry, lead Going Beyond Ministries. They count it as their greatest privilege to serve every denomination and culture of the church.

For almost two decades, Anthony Evans has voiced the gospel with a melodic, thought-provoking style, and has emerged as one of Christian music’s top worship leaders and singer/songwriters. Along the way, Anthony has released ten solo projects, (the last two climbing all the way to #1 on Billboard’s Top Gospel Album charts), released his first book, Unexpected Places, sung in numerous music videos, acted in a movie, and performed as “Beast” in a Disney Hollywood Bowl production of Beauty and The Beast. In addition, he has collaborated on inspirational events with his father—beloved pastor and international speaker, Dr. Tony Evans, and his sister—author and speaker, Priscilla Shirer.

In recent years, Anthony has been working in Los Angeles, where he appeared on NBC’s hit show The Voice and has been doing vocal production for TV and film. This sojourn in LA has led him to think more progressively about his music:  he desires to communicate in terms that connect with people spiritually, no matter where they are in their faith journey, without compromising his own faith and message. This focus, along with his powerful, one-of-a-kind voice, has allowed Anthony to vibrate the doors of the church and to venture beyond.